Perry Innovation Center eighth-grade students Kennedy Brezzell, Patrick Ireland, Will Dean, Isaiah Marble, and Genna Monterosso have proposed an experiment that will analyze the decay of rehydrated blueberries on the International Space Station, as well as here on Earth. Photos provided

GREAT WHITE – Students at the Perry Innovation Center in Grand Blanc have a unique opportunity to participate in the nine-week student spaceflight experiments program this school year.

Since last fall, students in grades five through eight have been meeting in groups and brainstorming ideas for experiments that could be conducted in space.

As part of this year’s Mission 16 program, a location has been designated for a PIC microgravity experiment. Groups of students competed for the spot through a rigorous design and proposal process.

The chosen proposal is an experiment designed by a group of eighth grade students from the PIC. Students Kennedy Brezzell, Patrick Ireland, Earth.

Observations and measurements will be taken based on the weight, size, microbial film and appearance of the blueberries. The goal of the experiment is to efficiently break down food matter for reuse to grow new foods in microgravity to better support space exploration. 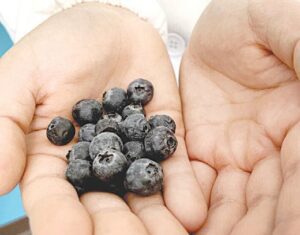 Will Dean, Isaiah Marble and Genna Monterosso have proposed an experiment that will analyze the decomposition of rehydrated blueberries on the International Space Station, as well as here on

As the chosen group, they will have a microgravity research “mini-lab” that will be transported to the ISS, where their experiment will be carried out by astronauts according to their instructions.

The students’ proposal states, “On Earth, food waste in America alone includes 1.3 billion tons of food each year and often ends up in landfills. Finding solutions to efficiently break down food matter that can be reused to grow new foods in microgravity is the key to sustainable space exploration. This is important because more people will visit the space, where they will have larger amounts of food waste in the near future. Our research question is: How is the decomposition of blueberries affected by microgravity? This experiment should be conducted in microgravity because the results could greatly benefit space agricultural programs.

In addition to support and supervision from PIC professors Karen Cormany and Jason Vallimont, students are mentored by Justin Stewart, Senior Fellow at the Society for Protection of Underground Networks. Stewart also offered the group the opportunity to publish their research in an undergraduate journal and write technical papers on DNA sequencing for their experiment. His own research “focuses on identifying key players and patterns in microorganism networks with an emphasis on plants, soil and maps”.

The five eighth-graders are now working to make improvements to their experience, incorporating feedback from the SSEP Stage 2 National Review Panel. For example, students will now add more specifications for the astronaut’s manipulation of their experiment. They will also secure materials for flight and control experiments and ensure that any biological material will pass the toxicological tests required for spaceflight. In February, their flight safety review form is due. SSEP will continue to work on modifications with the group until late spring, when the Space X rocket is expected to launch the experiment from Cape Canaveral Air Force Station in Florida.

The Student Spaceflight Experiments Program is a program of the National Center for Earth and Space Science Education in the United States and the Arthur C. Clarke Institute for Space Education internationally. It is made possible through a strategic partnership with Nanoracks LLC which is working with NASA under a Space Act agreement for the use of the International Space Station as a national laboratory. — L/R