Listening to understand and mobilize is not as easy as it seems. If that were the case, the world black people find themselves in would be very different, says Marc Lamont Hill, the keynote speaker at Monday’s all-day celebration of the life and legacy of Dr. Martin Luther King Jr. at the Kellogg Arena.

The celebration titled “MLK Celebration 2022, We, Us, Our: 55 Shades of Black” was organized by the Southwestern Michigan Urban League, African American Collaborative and Truth, Racial Healing and Transformation Coalition. In addition to Hill’s speech, the celebration included breakout sessions, a Black Expo featuring local merchants and entrepreneurs, an immunization clinic, and drumming and dancing performances by Flint’s Kuungana Drum and Dance Company. and the Nottawaseppi Huron Band of Potawatomi, among others.

Hill, host of BET News and the Coffee & Books podcast, said this year’s MLK Day gives people “an amazing opportunity to commemorate two things at the same time: the 55th anniversary of the Southwestern Michigan Urban League and ” the lasting legacy of the great Martin Luther King Jr. that was taken from us 54 years ago, far too soon.

He encouraged audience members to think about how they could build on King’s legacy and the work of SMUL. 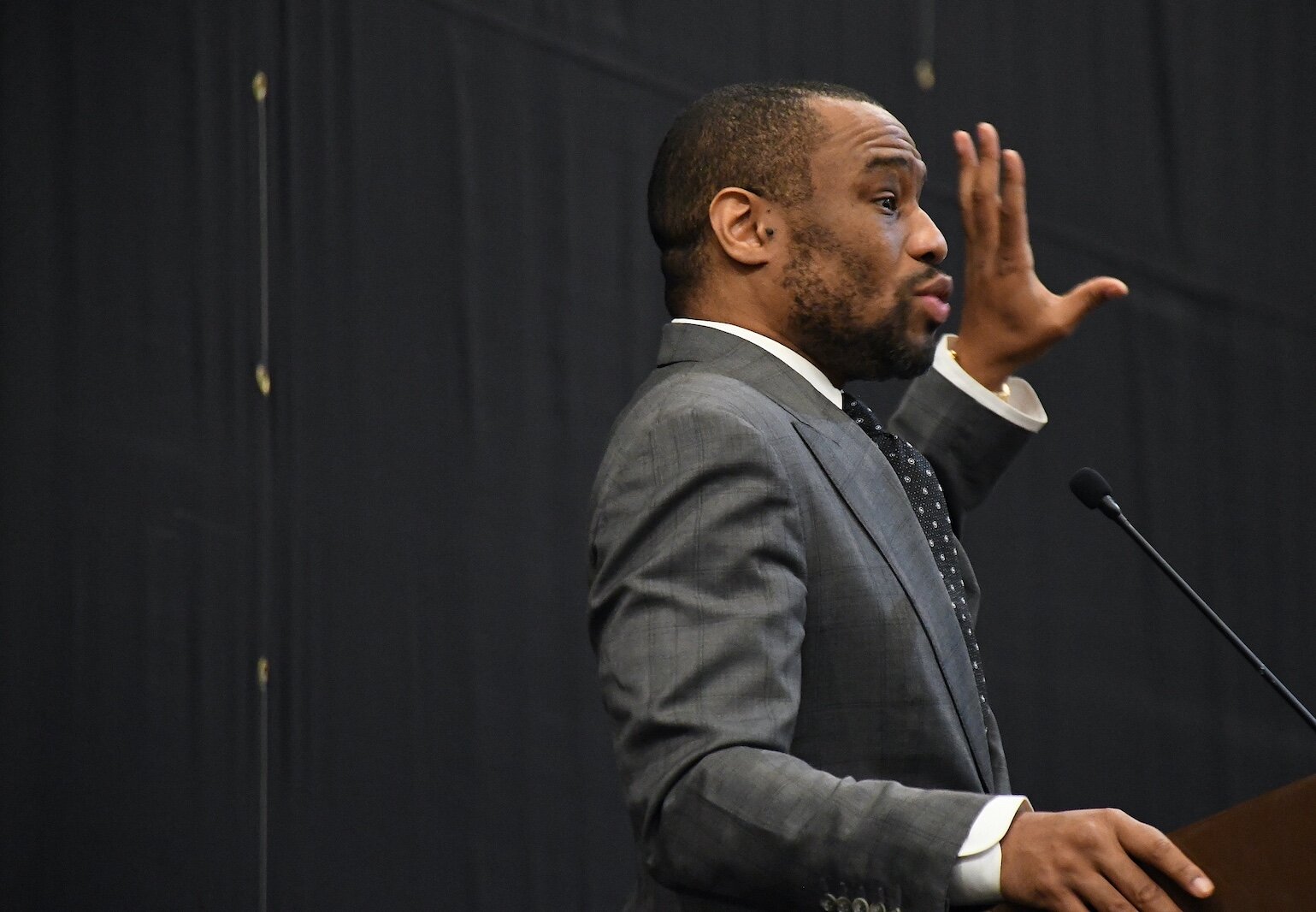 Dr. Marc Lamont Hill delivers the keynote address at Monday’s Martin Luther King, Jr. Birthday Commemoration “We, Us, Our: 55 Shades of Black,” sponsored by the Southwestern Michigan Urban League at Kellogg arena.While driving from Chicago to Battle Creek on Sunday with SMUL President and CEO Kyra Wallace, Hill says he got to see what gentrification has done to the city of Chicago.

“Then we took the freeway and I saw Benton Harbor where there’s lead in the water and if you turn one way you go to Flint where there’s even more lead in the water. , then you go through Detroit where our schools are being systematically dismantled just like Chicago where teachers are forced to work with a COVID reality,” Hill says.

In the context of all this, Hill asks, “What does Dr. King’s legacy have to teach us over the next 55 years? His legacy teaches us to engage in deep listening.

King listened to everyone, not just people who liked him or agreed with him or shared his experiences, Hill says.

“There are so many, many ways to understand race, class, and gender, but you have to dig deep to understand,” Hill says. He cites the working poor who don’t have the time or financial resources to join organizations like the Urban League or the NAACP (National Association for the Advancement of Colored People), but would still like to be involved.

“We have to organize for them and with them to create an infrastructure so they can be there,” Hill said. 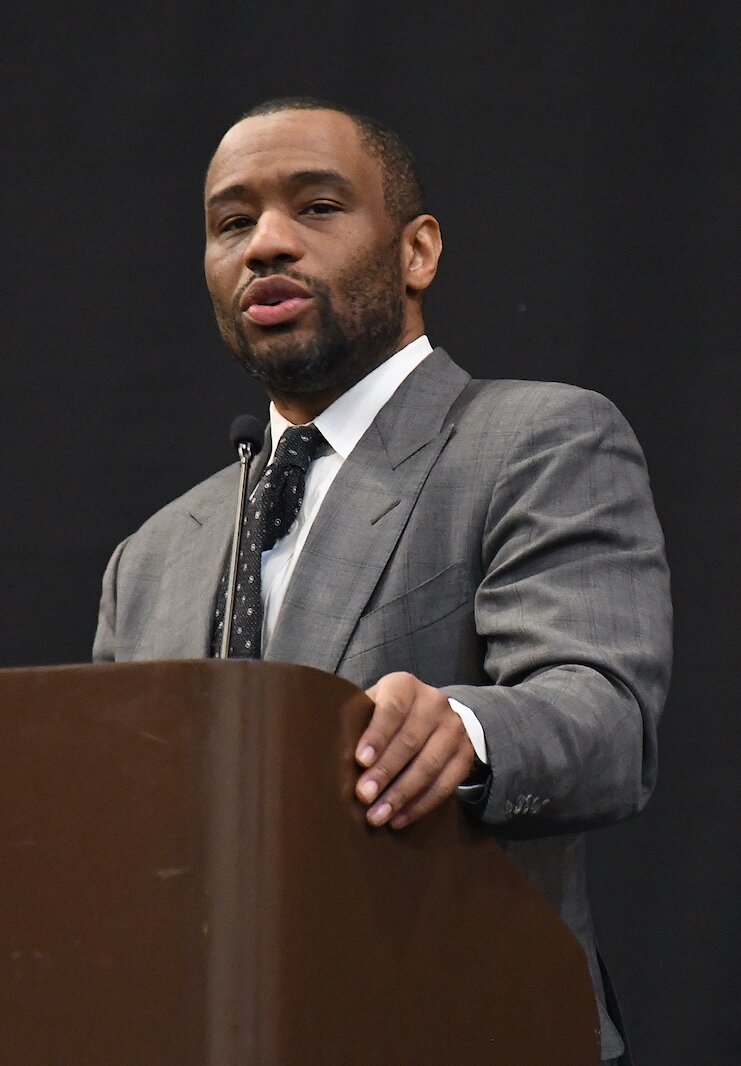 Dr. Marc Lamont Hill delivers the keynote address at Monday’s Martin Luther King, Jr. Birthday Commemoration “We, Us, Our: 55 Shades of Black,” sponsored by the Southwestern Michigan Urban League at Kellogg arena.The same is true, he says, of events like parent-teacher associations. He says many people don’t have jobs that give them the ability to attend PTA meetings at scheduled times. The solution, he says, is to schedule them around the parents’ working hours.

“We must listen to their voices. Too often we try to organize the poor and we don’t ask ourselves what their needs are, or what their interests are, or what will make them whole,” says Hill.

Hill earned a Ph.D. from the University of Pennsylvania and is the Steve Charles Professor of Media, Cities and Solutions at Temple University. Prior to that, he held positions at Columbia University and Morehouse College.

As he watched the audience of more than 100 gathered to hear him speak, Hill called it an “incredible accomplishment” to have black and white people in the same room interacting and talking to each other. But, he says, the reality is that black people always work harder for less money – 70 cents for every dollar a white person earns. And black children, although they may come from households with the same annual incomes as white children, still experience different and less equitable outcomes in school and in the criminal justice system.

He said work must continue to repair the damage done between the “haves” and the “have nots”. 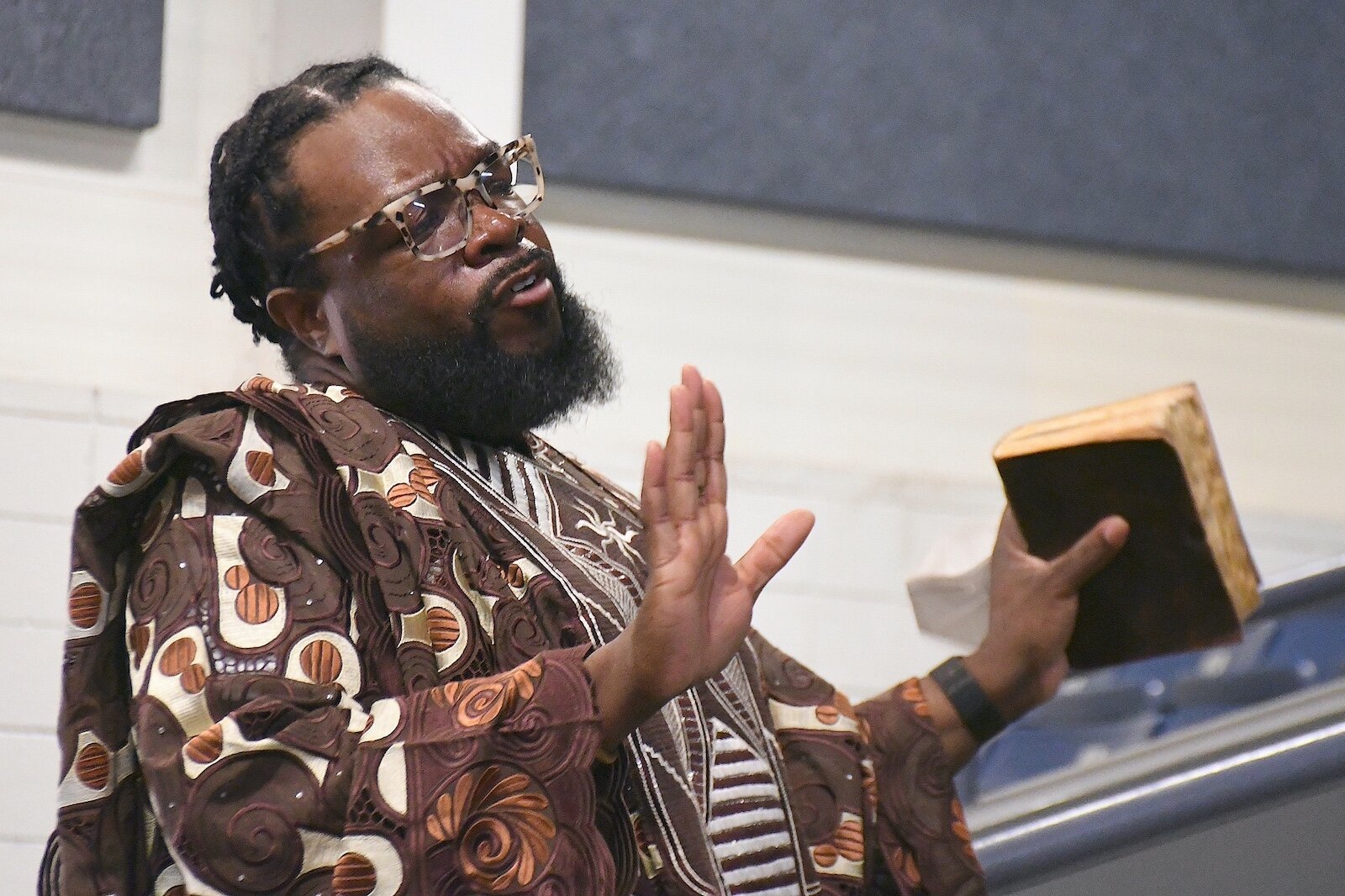 Dr. LE Johnson helped facilitate a session on community engagement at the Martin Luther King, Jr. birthday commemoration “We, Us, Our: 55 Shades of Black” in Battle Creek.Part of this will involve making the connections.

“You can’t say you’re fighting poverty and war and not understanding that relationship,” Hill says. “As long as capital is created and accumulated and multinational corporations are more powerful than the government, you are going to have war and you are going to send poor people, mainly blacks and browns, to fight. If you are a serious listener, you must engage in these types of analyses. Don’t tell me you’re thinking about the environment and not about racism. Why do you think there is lead in the water at Benton Harbor and Flint, but there is no lead in the water at Grosse Pointe? The Grosse Pointe waterway is reserved for Detroit. We live in a country that assigns different values ​​to the lives of different people.

He says this is the case with prisons that allow people to engage in activities and behaviors that lead to recidivism. This situation is aggravated by the lack of access to educational activities in prison.

“We have to listen to each other so we can hear the connections,” Hill says. But it goes beyond listening, embracing differences of opinion and building a foundation to create change together, he says.

Hill, an award-winning journalist and commentator, says that when he would appear on FOX television news shows with former FOX personality Bill O-Reilly or current on-air personality Sean Hannity, their talking points, their stats and jokes would all be the same. He says it’s because they were organized and met once a week and discussed strategy so everyone was aware. 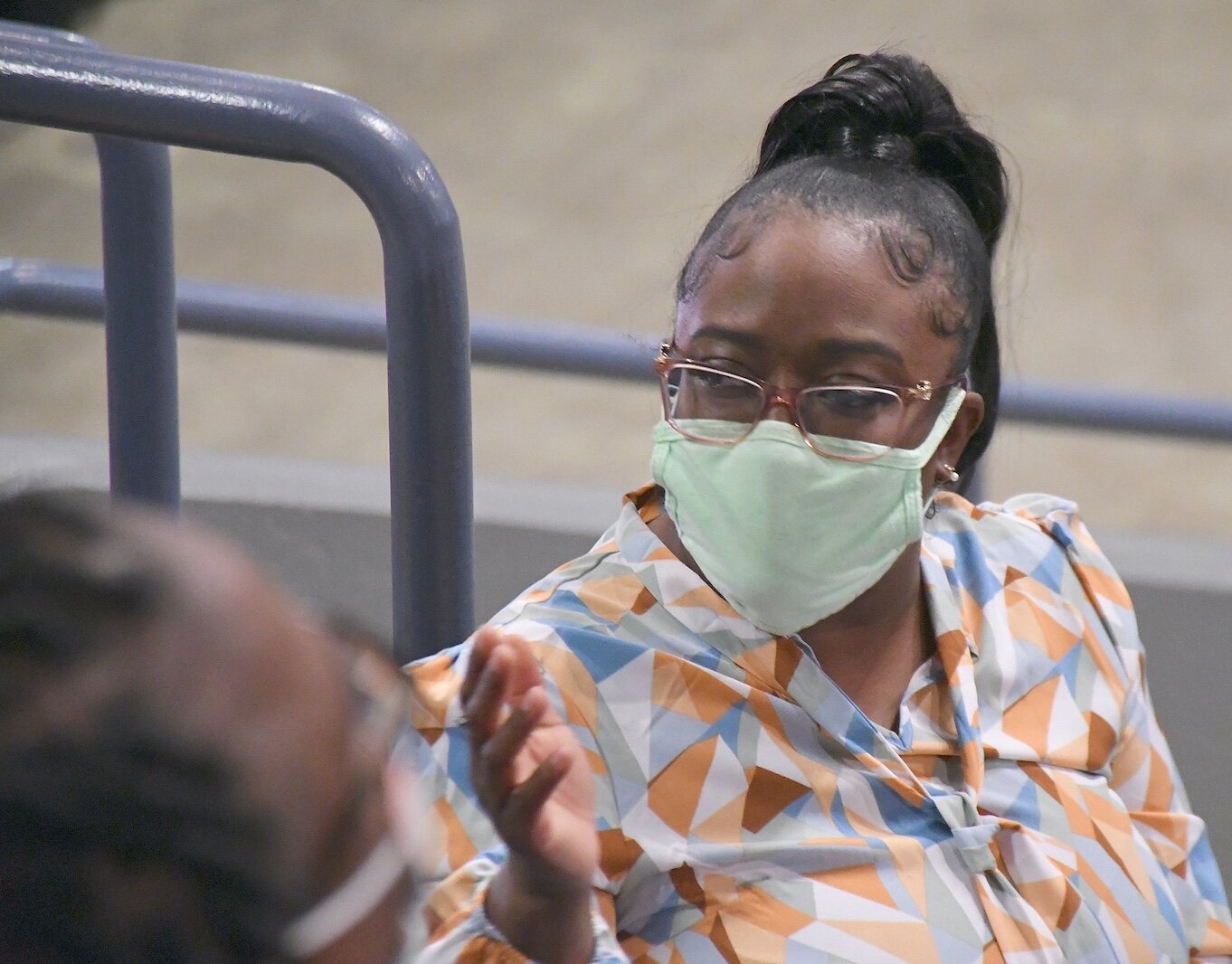 Dr. Elishae Johnson leads a mental health session at the Martin Luther King, Jr. Birthday Commemoration ‘We, Us, Our: 55 Shades of Black’ in Battle Creek.“If you hear this enough, it makes sense,” Hill says. “People in that room didn’t necessarily agree with each other. They all had different positions and some made fun of others.

Despite their differences, they united.

“If people see the world so differently and come together, why not us,” Hill asks. “Sometimes we will be so 99% together, but we will have 1% disagreement on it and it tears us apart. Our open enemies win when this happens. It doesn’t matter if you’re 55, if you spend the next 55 years apart, it doesn’t matter if you recognize that you’re 55 Black. We need to come together, listen to each other and organize, but we also need to force America to listen to us.

When King organized his march on Washington in 1963 for black jobs and freedom, it was 100 years after Emancipation and Hill says black people were still looking for those jobs and that freedom. This march underscored that “we were free to be unequal in education and employment,” Hill said.

King made his point in front of the Lincoln Memorial because he wanted people to know that President Lincoln’s Emancipation Proclamation did not do what it was supposed to do for black people. 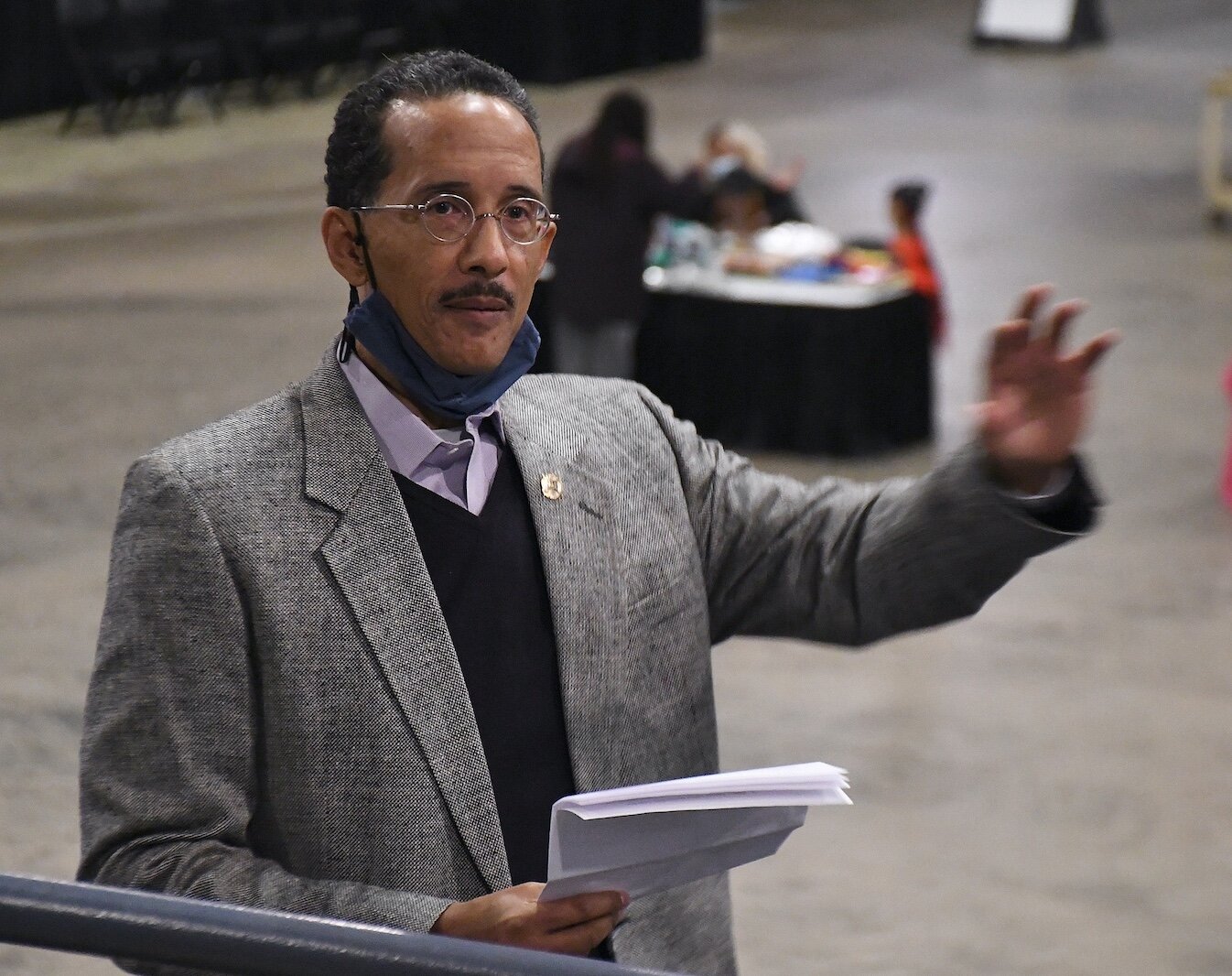 JR Reynolds hosts a racial equity session at Monday’s “We, Us, Our: 55 Shades of Black” commemoration of Martin Luther King, Jr.’s birthday, sponsored by the Southwestern Michigan Urban League at Kellogg Arena.“Dr. King said the Emancipation Proclamation was a promissory note. He said the promissory note was like a check that America wrote to the Negro and was returned to the Negro for lack of sufficient funds. King said, “I refuse to believe that the great vaults of democracy can be empty,” Hill said. “Before we get to the dreamy part of his speech, he talks about broken promises.”

These broken promises have continued, and Hill says, “We must continue to demand that America keep its promises. We don’t have to rebuild this thing. We just need to get to a place where we listen, respect and honor that promise. As we think of the life of Dr. King who gave his very body as a ransom for America and democracy, let’s finally commit to listening to each other and listening to the voices of freedom and let’s start by finally listening honestly and systematically about the life and radical legacy of Dr. King because he wanted people to know about it.