The Nanaimo Street Bridge is permanently removed in early summer as part of the Penticton Creek Restoration Project.

Penticton Creek is being improved to replicate a more natural state.

In its current natural state, the creek regularly flooded part of the city, so in the 1950s it was channeled into a barren concrete shell. This successfully solved the flooding problem, but at the expense of a thriving habitat.

The City is about to launch the next phase of restoration of the creek. The first two phases were completed in 2015 and 2018.

Crews will redirect the water and then demolish the old concrete bed. They will have a short window of opportunity to install new soil that looks like a stream in nature, with rocks of all sizes creating steps, rapids and small waterfalls.

“As we get more and more concrete and rock and gravel, the habitat becomes more inviting for the fish,” said Ian Chapman, the city’s director of special projects.

The difference these efforts are making can be easily appreciated from the Nanaimo Street Bridge that crosses the creek. Looking downstream – where restoration work was completed a few years ago – it almost appears to be a pristine stream as only natural features can be seen. But on closer inspection, it’s obvious that the rock faces are a bit too perfect in shape. 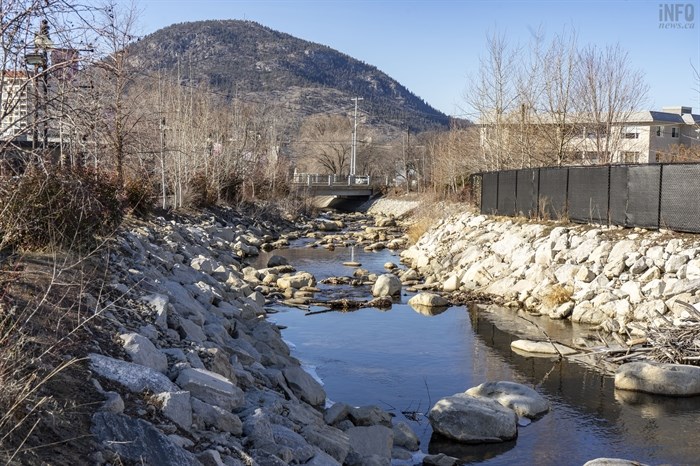 Looking down Nanaimo Street, this section of Penticton Creek where restoration work has already been completed is much more attractive to fish trying to spawn

“The rock we installed makes it easier for the fish to swim between them,” he said. “There are no shallow layers of water that aren’t very useful for fish – it’s a much more natural situation for them to swim.”

On the contrary, looking upstream – where restoration work has not yet begun – the water trickles through the flat concrete where organic waste accumulates. 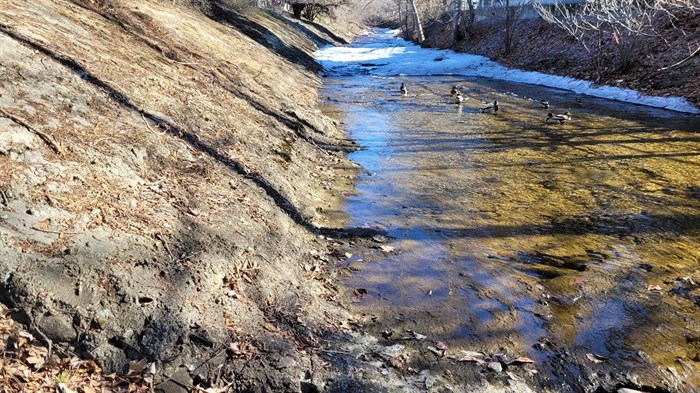 A simple, concrete section of Penticton Creek that will be restored later in 2022

Current environmental regulations would not allow the construction of a bare concrete canal in British Columbia, Chapman said.

Kokanee and rainbow trout are the most popular types of fish found at Penticton Creek.

But while restoring fish habitats was an important goal for the city, a more immediate concern was the deterioration of the concrete pavement that has been weathered over the past seven decades.

“Once you have a small hole or a crack, it can start to deteriorate to the point where large pieces explode,” Chapman said.

Concrete can decay from frost damage, decades of tree growth, and some sections may have been built with thin layers. As water rushes relentlessly along cracks and holes in the concrete, the earth below is washed away and erodes.

One of the main reasons the whole project can’t happen all at once is that it costs $30 million, he said.

The provincial and federal governments have provided some support, but “in no way does the government provide this type of funding.”

Another reason the project is taking time is due to environmental regulations requiring work to be carried out within the annual fishing window, to minimize the impact on local fish populations.

“Basically you have four weeks at the end of the summer and that’s it,” he said. “Every year.”

In reality, the city can only complete a few hundred meters of work in that time.

When the fish window closes, “the water has to start flowing again, or you’re in big trouble.”

But this year’s work will stretch more than 300 meters — “much bigger” than the 150-160 meter section between Ellis Street and Nanaimo Avenue, he said.

“One of the downsides to these projects is that when we approach them, we start by removing a lot of the habitat. Unfortunately, you can’t hang trees in the air while you dig under them.

Many downed trees struggle to survive anyway because their roots grow through the concrete, he said. And one of the final tasks is to replant the vegetation.

“People are quite shocked to see them go, but the trees have to be cut down, it’s completely unavoidable.”

In addition to vegetation removal, part of the project includes the removal of the Nanaimo Street Bridge in early July. The bridge is often used by vehicles and pedestrians. The council will consider replacing it with one reserved for pedestrians and cyclists.


To contact a reporter for this story, email Dan Walton or call 250-488-3065 or email the editor. You can also submit photos, videos or news tips to the newsroom and be entered to win a monthly prize draw.


We appreciate your comments and opinions on our stories, but play well. We will not censor or delete comments unless they contain off-topic statements or links, unnecessary vulgarity, false facts, spam or obviously fake profiles. If you have any concerns about what you see in the comments, email the editor in the link above.