The winter months are the best time to scuba dive in False Creek. This is when the water quality is at its best and the light filters in to illuminate the fish, crabs and mussels.

Announcements, events and more from Tyee and selected partners

Curious to know what our journalism has achieved and how we are progressing? Dive.

A reader will receive two tickets to the exclusive event, plus snacks, drinks and more.

Fernando Lessa is a photographer and biologist who spends a lot of time immersed in the urban waterways of Metro Vancouver, chronicling marine wildlife. Lessa has contributed photos to some past Tyee Stories, but you can see more of her photos at his website.

Some species, like salmon, are under threat, once vast fisheries now reduced to a trickle. Others are bouncing back, signaled by the return of killer whales to Burrard Inlet and even False Creek, which separates dense downtown Vancouver from the Olympic Village, Fairview and Kitsilano. 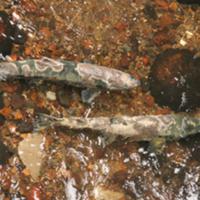 “Never give up on any waterway”

As gleaming new condominiums now ring in False Creek, over the past few decades the the region was a hub for sawmills, shipbuilding, slaughterhouses, marshalling yards, factories and warehouses. But before the area was transformed for colonial industry, which included the infilling of a tidal mudflat, False Creek extended to what is now Clark Drive. It was the site of the Squamish Sen̓áḵw village and was a important place fish for salmon, hunt elk, beaver and deer, and harvest traditional resources like cedar.

Some of the pollution left over from historic industrial uses is still there, buried under False Creek soil, Lessa said. But the biggest problem with water quality in the waterway is sewage, which drains into the water from the surrounding town and the many pleasure boats that ply the waterway.

False Creek is still not clean enough to swim in and every summer the beaches just outside False Creek are regularly closed as the number of E. coli is too high. But in recent years, the City of Vancouver has worked to separate the pipes so that sewage is no longer mixed with rainwater. The city has also set up a boat emptying service.

Lessa’s photographs of False Creek were taken from January to March in 2021, while working on a project with the Vancouver Board of Parks and Recreation. They show an underwater world that most Vancouverites never see. There’s the silver sheen of a school of sticklebacks, a crab resting on its hind legs, the bright red and purple of two starfish clinging to a barnacle-encrusted plank.

A local conservation group called Squamish Streamkeepers has been working to bring herring back to False Creek since 2011, and Lessa’s photos show their efforts are paying off. Herring is an important species as it provides food for larger animals like seals. the seals then become the prey of the killer whales.

Lessa spends around 200 days a year diving to capture images of what’s happening underwater, and he plans to return to False Creek to dive in the coming weeks. There have been reports of fruit bats (a small shark) returning to False Creek, and he’s curious to see if he can spot one.

“I was very surprised at the amount of life I found there,” he said. “So far I’ve seen at least half a dozen species of fish, lots of different crabs – there’s a crazy variety of animals that live in there.”