Meow Wolf takes visitors on a converging journey through the multiverse – a confluence of four distinct worlds that collide around the viewer’s senses.

Meow Wolf Convergence Station sits at the crossroads of Colfax Avenue and I-25 like a fortress of the extraordinary – a maze of mind-bending worlds meant to immerse, inspire and entertain.

The exhibits and attractions therein wait to bombard visitors with a miasma of uncharted, unpredictable madness without warnings, means, or meaningful signage. The experience is somewhere between an interactive art museum and an overrated tourist trap. Similar to the institution’s original location in Santa Fe, NM, and the next installment in Las Vegas, NV, this destination drips with the artistic input of hundreds of contributors and collaborators – many of whom are residents of Mile High City. The organization’s official statement is that of the more than 300 artists who collaborated, exactly 110 were from Denver.

Whether Denver’s Meow Wolf installation is truly a monument of modern and postmodern art or a sensory amusement park overloaded with audio and visual steroids is a matter of opinion. These can range from positive to critical to indifferent – depending on one’s perspective and position on the merits of big business converging with independent artists.

Scott Hildebrandt – aka Mr. Christmas – is a Denver-based artist who combines his love for miniatures and the holidays into a unique brand of playful creativity. Hildebrandt asked to collaborate with Meow Wolf in 2017 and waited two years before final plans to get to work were made. “In the summer of 2019,” he begins, “I started submitting plans, diagrams, specifications, and requirements for the space I would need. Then, over the rest of 2019, there were several meetings with the light and sound teams to define my needs for this project,” he explains. “There was a lot of momentum at the start of 2020, until the pandemic came to stop everything. [By] At the end of summer 2020, I was finally able to start collecting materials simulating my design. In the fall, I was assembling and designing my concepts and building the frame. At the start of 2021, I was in full production mode with a very fast deadline of May 1 to meet final inspections. For four months straight, I worked seven days a week, about 8-14 hours a day to meet that deadline.

Hildebrandt says he considers Meow Wolf a hub of artistic merit and an exceptional Denver treasure. “I really believe that Convergence Station is an art installation and certainly a 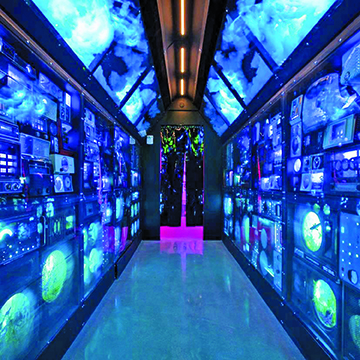 Scott Hildebrandt specializes in miniatures and dioramas but his Meow Wolf collaboration is a macro-installation of his work. 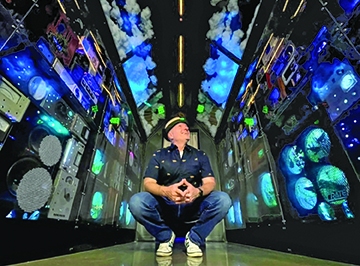 Scott Hildebrandt’s installation Meow Wolf is a life-size diorama made from repurposed materials.

playful curiosity and invoke the imagination with art in a way that no other museum or gallery can. Denver is really lucky to have something like this in its own backyard. Not only is it good for Denver, it’s very good for Denver’s art scene. Convergence Station features 110 Denver artists and shows just how strong Denver’s art scene really is. Since I started my journey as a full time artist, I have had the opportunity to meet so many wonderful artists here in Denver. Every first Friday you can explore galleries all over Denver showcasing new and old artists and be truly amazed by the talent we have here,” he says.

Mar Williams is a Denver illustrator who got involved with Meow Wolf in 2016 and later became part of a class action lawsuit in 2019 against the company for discrimination. Williams is transgender and, alongside several other people, complaints have been filed against the company (a B corporation) for unfair employee practices based on gender.

While the case was settled out of court in early 2020, Williams maintains a separate opinion on Meow Wolf’s role in the arts community. “I would like to include my previous quote to Westword, which safely sums up much of my point,” Williams says. “My hope is that they do more to uplift individual artists than to absorb them.”

Williams goes on to explain, “To develop some of that; Is Meow Wolf authentic art? I think it’s important to separate the brand from the art for this question. The maximalism and ironic sincerity of metamodernism are ultimately hollow when they come from a brand, because the human vulnerable point of self-reference is insincere or simply does not belong to it. It’s like Wendy’s (fast food chain) Twitter account is pissed off. It does not mean anything. I think there’s a lot of genuine art and artists in this space, and while the bigger, flashier, more profitable container can get more traffic, the container isn’t the art and business are not collectives.

While artist Dice 51 currently lives in Denver, he is originally from Albuquerque, NM. While he begins most of his work with pens on plain paper, that’s hardly where he stops. The end result of his continued attention to a particular piece may result in p 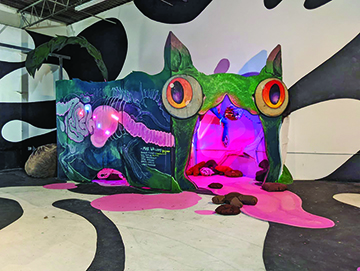 Mar Williams was one of the first Denver artists to get involved with the corporate megalith and has distinct opinions on the art provided by big brands.

Dice’s native New Mexican heritage prompted him to apply to become a Meow Wolf collaborator. “I started working with Meow Wolf through the events team. I was organizing live art and vendors for some shows at the Santa Fe exhibit, bringing in artist friends from all over the country to exhibit their work,” he explains. “I grew up in Albuquerque, so as a local artist in New Mexico, I knew I wanted to contribute to Meow Wolf. Finally with [some] help, I was able to apply for the Denver Expo,” he says. “I spent almost three months working directly on my piece for the exhibition, and the application process took about two years. I did most of the design and build in the months leading up to installation, then spent two weeks installing the part.

Dice says the experience was unique but positive. “I’ve never worked on anything so big,” he begins. “Luckily I had full creative control once my proposal was accepted, so I was able to really dive into the creative process without any outside influence. There are so many people involved that I still haven’t The result was amazing, I always come across work that I have never seen there whenever I have the opportunity to walk around.

Part of Meow Wolf’s trademark is interwoven slices of art with no signage or explanation, leaving uncredited collaborators to take solace in the fact that they’ve been paid to be part of something big and beautiful. While each artist is credited on the Meow Wolf site, some were determined to put their personal stamp on their work so that curious visitors could find them if needed. “I wish I could associate my name more with my project,” says Dice. “I had to get creative with this, so I hid it throughout the piece and had a full description displayed with my pieces in the gift shop. A few other mad artists 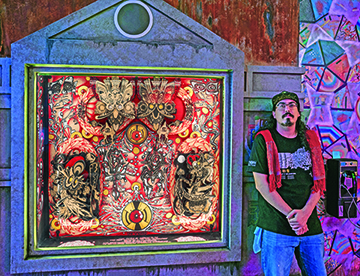 and great ways to get their name on their piece. I know one of them had a giant symbol made up of QR codes in his room, and the QR codes lead to his website. I think something like this is the best decision, something subtle enough that doesn’t take away from the art, but direct enough to really connect with the millions of people who go to the exhibit. I definitely see Meow Wolf as an artistic component. It’s like a giant piece of art that you can walk around and be a part of. From the entire exhibit to the tiny hidden details, the entire experience is artist-led. »

Speaking of galleries, one local artist who has secured a prominent presence among the First Friday visual arts crowd goes by the nickname of W. Max Thomason. He holds the Meow Wolf phenomenon in ho-hum regard, saying, “Put simply, it’s commercial art. No matter what title, label and/or designation you give it, it’s just commercial art. It’s not art. I also don’t think it should ever be considered art. In all honesty having never spoken with the designers or creators or makers I can’t say if this was ever meant to be considered art but I think it shouldn’t be considered or judged as such,” he says. “If it inspires or motivates or speaks to anyone, fantastic. It’s never done that to me. I think [the] Assessing a modern amusement park-style entertainment refurbishment is a fair and accurate elucidation.

Meanwhile, while most of the art world is somehow preoccupied with Meow Wolf, there are those who remain blissfully unaware of such a phenomenon. One such person is Abe Brennan – a musician and illustrator from Denver, enjoying a design job bonanza after 2020/2021 creating T-shirts for bands. When approached about Meow Wolf, he blinked, shrugged and said, “Huh? Meow what? Never heard of it.”

Either way, if you yearn for this immersive first-hand experience, be prepared to pay hefty admission fees. Tickets are priced from $44 to $49, depending on age. Get what you pay for by choosing an early arrival time and plan to stay there for at least a few hours. Then get ready for a wild, hyper-challenging and one-of-a-kind ride. Whether you are an artist or a spectator, this destination has something for everyone.